but… I bought the glass based on my stupid math, so it’s not big enough: 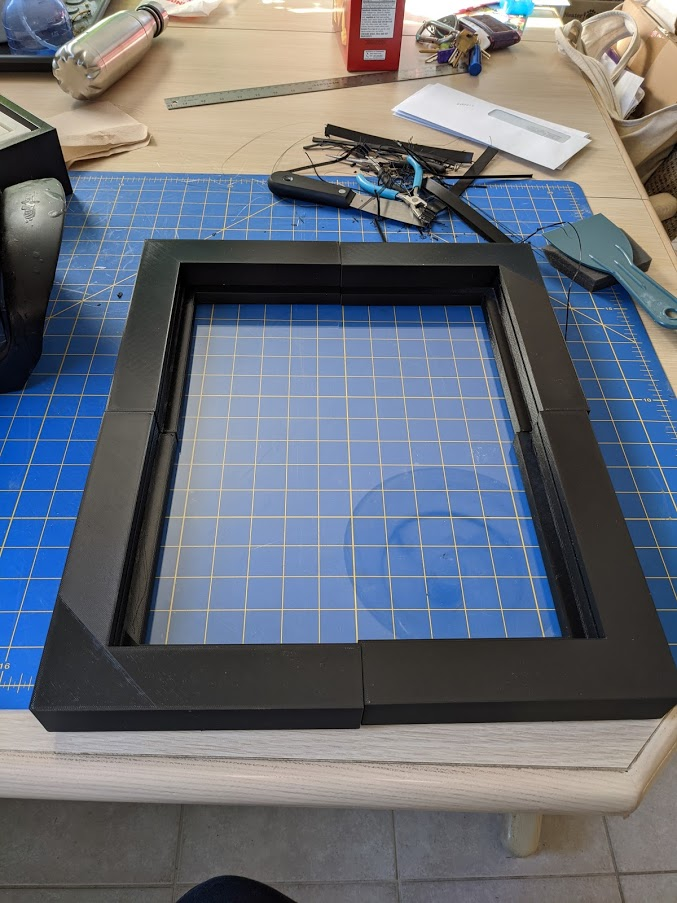 To be clear (hah, clear, like GLASS, haha, nice) I’m intending to put tape up around all the edges of the glass as a quick way to make something that will hold the silicone for the outer edge. So now I need to go buy another $18 piece of glass, uuugh. But, I mean, that’s whatever. Now I have a piece of glass I can use to make a 11×14 frame that is 1″ thick, so it is what it is.

However, the imperfections from my 3d printer are driving me CRAZY:

So I’m trying to figure out if I should re-print… They’re 15+ hour prints PER PIECE, so that’s another 4 days of printing. OTOH, I put the bevel for the back cardboard piece on the short side by accident, instead of on the long side like I had imagined, so if I reprint then I can put that bevel on the correct side. Plus, the tops of the prints are considerably more consistent than the bottoms, so if I reprint then I can also flip them so the “showy” side is facing up.

Ok, I think I’ve talked myself into reprinting the pieces, but that means four more days of waiting for the prints to finish before I try to make the mold. That should be ok – the deadline (arrive with enough time to use the mold to make an xmas present) isn’t for a little while – I’d estimate to make sure it got to the requester in time that I would need the mold finished, in the box, and at the post office no later than Dec 10th. (that should give PLENTY of time for the absolute worst case scenario where the post offices loses it and I need to pour a second mold and send it again – at least making a second mold would only take four hours, since everything would be ready to go, just mix the silicone, pour, and wait for it to set!)

And as for the seams between parts and any lines between 3d printer extrusions, I want to try using wax to fill them in and smooth the whole thing out so that the mold makes resin frames with NO seams and NO weird lines. And I have NO IDEA how well my idea is going to work! I might have to try something else; we’ll see how it comes out. At least I don’t need to worry about my wax experiment ruining the 3d printed parts: the wax melts at a much lower temp than the PLA! So if it doesn’t work then I melt the wax off and try to think of something else. Bluh, maybe I’d have to sand the parts. Uuuugh, do not want… hopefully the wax works.